I want to empower women. I want people to be afraid of the women I dress. 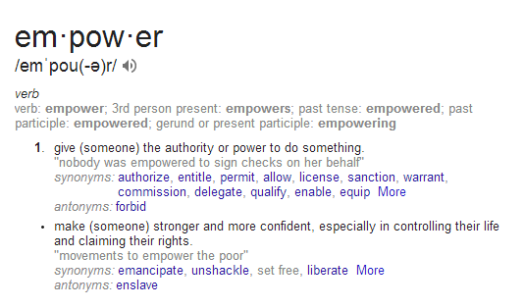 I thought about telling you about the time I had that tea-date with Ms. Duffy and she convinced me that the entire universe was mine for the taking. That I could literally do and be whomever I want. That the only thing I couldn’t do was fail. I certainly felt emancipated after that conversation.

Or maybe even after sitting through a week of Revival services at my church a few weeks ago. I learned more about my God, about my rights as His child—and I definitely felt confident and authoritative.

But the most recent example that pops to my mind of feeling empowered, as it is defined above, was this past weekend. I had gotten off of work at my second job (which offers some empowerment in itself—the busy-ness and financial gain of working two jobs) and was wrecking my phone to find out what was going on that night. I knew who I wanted to see. I knew what I wanted to do. It was just a matter of making it happen.

So I sent out some text messages, I sent out some snapchats, I dialed a few numbers. I put on a crop-top I stole from Brittnee and my new sandal-wedges. My hair was cooperating and my makeup was being even more compliant than my hair. I felt great. I looked great. Now I wanted to be seen.

So I hopped into my car and made it happen. And when the one person that I wanted to see me couldn’t stop talking about how great I looked… well damn.

So what’s that mean for the state of Kelsea? Is my self-worth lying in a shallow pit of MAC products and cat-calls? Why did I feel so great about myself when a guy is validating how great I look at midnight on a Sunday? I’d like to say it’s because I have feelings for this guy and him complimenting me was somehow, in my brain, reciprocity. I’d even like to say that I have deep-seeded Daddy Issues and I need that male attention like none other. I’d also like to offer the answer that I’m just at that age and making the most of it.

But I think the real reason I felt so empowered that evening is two-fold. Walk with me.

I felt special. As I am growing older I am realizing that I’m not as special as my parents and family and teachers had pounded in my head. I’ve grown up in small, private Christian Schools where my brother and I were always the only (or one of few) black children. He and I were both very smart kids. I never had to study for anything in High School. Grades were never an issue. My brother was an all-star athlete in literally every sport, and I was the musical one. We were well-liked by everyone. We lived in this bubble where we were placed on a pedestal—perhaps in an attempt to compensate for the lack of diversity in the aforementioned bubble. I’ve always felt special.However, after busting out of White Suburbia, OH, I realized I’m not that big of a deal. That you have to actually work at stuff. That not everyone thinks I’m pretty.

So in those moments where Mr. Hot Guy is staring directly into my eyes and gawking at how beautiful I am—it’s a very welcomed flashback to those days where I was the only girl in the world. Where Kelsea was queen. Where my worries were few.

I’m still undecided on if this is a bad thing or not. I’m sure there is a balance to be found. And I’m well aware of the adage, “Humble yourself before God does it for you.”

I felt in control. Here’s Kelsea! Just got off work from her second job. Got a debit card full of dough in her Nine West bag. She’s running around the house in heels, spraying perfume and rapping along to Big Sean. Her phone is buzzing like mad with plans for the evening that she is ultimately coordinating. Everything is panning out exactly how she wanted it to. She must have her shit together, yeah?

Oh how wonderful it is to feel in control; to hold the reigns; to call the shots. Because only one who is authoritative and free and confident can do such a thing, right?

And oh what a high regard our culture/society holds those who control things. We’re bosses,yeah? We’re top of the totem poll. We answer to no one. And in some regard—I agree that we ultimate control the way our lives pan out—but I also believe God’s will for each of us is to surrender all control to Him.

So whether it’s right or wrong (in the moral sense) the truth remains that I feel empowered when I Feel Special and In Control. And although I can only speak for myself, I’d like to think the moments when you felt empowered, you also felt special and in control, as well. So how can I go about empowering my sisters (and brothers) in a morally sound way? How can I make you feel special and in control? I guess you’d have to tell me how I can do that, right? Well here’s how you can make me feel that way… and maybe we can just reciprocate for one another, yeah?

Listen to my conversation.

Pray for me, specifically. Not just “your friends” or “your family.”

Ask about my dreams and plans.

Spend time with me.

And I promise to do my best to do the same for you.