A good friend of mine invited me to the Keyholder event, last evening. She had an extra ticket and thought it would be something I would be interested in. I did some research and saw that Melissa Etheridge would be being interviewed. I immediately thought that I could, in no way, relate to a thing Melissa Etheridge could ever have to say. My mind went to the one (maybe two?) songs of hers that I knew, and only from hearing them at places like the dentist’s office and in the SUV’s of my friend’s mothers. Regardless—I agreed to attend, as we had planned on also participating in a cocktail hour.

When we arrived at the Palace Theater, I was overwhelmed by estrogen. The myriad of young, vibrant faces and experienced, worn ones was intriguing to me. The diversity of the crowd was insatiably welcoming. I quickly forgot that Melissa Etheridge would even be in attendance and solely began absorbing the positive energy in that building.

My friend and I walked upstairs and found a seat, in the nose-bleeds, in front of a row of very young, very antsy, girls. My positive mood was instantly squashed. The event began quickly and I tried to focus on the screen as the back of my seat was being kicked and the juveniles attempted to whisper to one another. I instantly tried to decide how old this row of girls must be… and after tallying the number of pigtails and brightly patterned capris, I decided on a median age of eight.

The lights began to dim and a video began to play. Some woman was paying tribute to her mother in law and could barely get a word out without crying. I thought about the women in my life that make me emotional just at the utterance of their names. My heart warmed. The next video was in tribute to a name I recognized, “Chasity Kuttrus.” I touched my friend’s shoulder and immediately whispered, “I know her! She’s friends with my mom!” My newly thawed heart began to open. If this was something someone as renown as Chasity was involved with—they had my full attention.

A well-dressed woman appeared on stage, shortly after the videos finished. I noted her orange jumpsuit and tried to imagine myself in one. Then she began to speak and rattle off statistics that flew past my heart and chilled my bones. “A girl’s self-esteem peaks at age eight,” she said, seriously.

I immediately grabbed my phone and opened up twitter. Everyone I knew had to hear what I just heard.

Third grade. No. Second grade? That’s the best a girl would feel about herself…

My mind went to the row of probably 8-year-olds behind me. I began to swell with compassion. I began to tremble. My open heart now had now completely unhinged whatever doors were attached. I had to change this statistic. I had to fix this. We have to fix this.

More videos. More testimonials. More tweeting on my end. How fortunate I felt that fate lead me to this event. I had to share it with anyone who would listen.

Finally – Melissa Etheridge appeared, guitar in tow. She was singing the one song I knew. I felt so connected to her that my brain travelled back to every time I had ever heard it and allowed me to recall some of the lyrics. I sang along like an anthem.

Then, Melissa sat down and began to speak. I hearkened. She was saying things I found inspirational and encouraging and motivating. I was captivated—but soon resolved that the atmosphere had done that. The positivity and estrogen consuming the air I was breathing was putting me in an emotional state, I decided. She could’ve said “bologna” and I would’ve typed it out and saved it.

She then uttered the most important words I would hear that night, 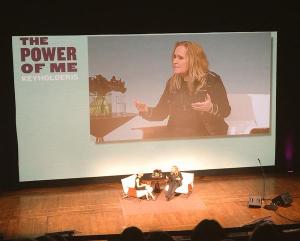 Instantly, a bridge was built between this fifty-something, white, lesbian woman and my twenty-three-year-old, African-American soul. I climbed out of my skin and into hers. She got it. She understood—in a way that I was sure the people closest to me probably didn’t. My heart began to pump in response to the adrenaline I was feeling at simply being understood.