Erin Scott and I met through happenstance. She was launching her Bad Bish Network and Tonnisha and I were just getting started on our networking kick. I was just getting introduced to The Women’s Fund of Central Ohio and taking baby steps into my dream career. Tonnisha had signed us up to attend Erin’s Bad Bish cocktail hour, and the rest you could say is history.

Once you start showing your face around the city, especially in the young professional space, you start to see the same faces over and over again. But Erin isn’t easily lost on me. She’s usually hosting, facilitating, speaking, etc…

So when she texted me last night and asked me to join her table for The Columbus Foundation’s “The Big Table” campaign—I knew I had to make it happen.

The Columbus Foundation is a 70+ year old organization started by a group of citizens who just wanted to make the city better. Now, it is one of the largest philanthropic forces in the city, “assisting donors and others in strengthening and improving our community.” You may have seen The Columbus Foundation efforts in “The Spirit of Columbus” or even “The Big Give.”

So what the hell is The Big Table? 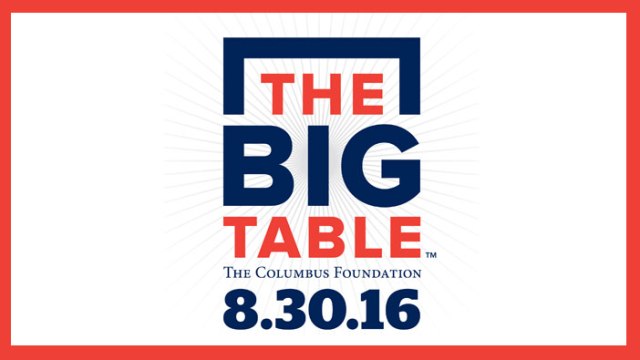 Today, er, yesterday… depending on when I post this… August 30th, 2016, The Columbus Foundation invited a guided, city-wide conversation about the issues we face and how to overcome them. Hosts signed up to facilitate groups of 8-12 for one hour of safe dialogue about how to truly make Columbus the greatest city in the world. The hosts of these discussions would take the high-level notes and takeaways and present them back to The Columbus Foundation. 4,000+ Columbus residents were expected to participate. I am anxious to see what the true number becomes.

Why should I care?

I don’t know, really. But I’ll tell you why I care. Columbus is my city. I was born in Mount Carmel West, I grew up on the south side, I’ve worked for Nationwide and L Brands in some capacity or another, I got my ACL repaired at Nationwide Children’s, I use to go to Clipper’s games with my family at The Coop and I spent every Sunday morning on W Broad Street at the bottom of the hilltop at church.  Just like you spend most of your formative years hating your parents and then finally grow up and learn to appreciate them, so have I grown to truly adore my city. I love the person it has shaped me into. I love that it cares enough about bettering itself to facilitate these types of events. I love that selflessness is at the core of Columbus and is evidenced in a myriad of ways.

And to quote one of my life mantras, “Change must be actively pursued.” So you should care because you (probably) live in a city that is actively trying to make itself better. Why wouldn’t you want to be a part of that positive change?

We started our Big Table discussion with a sounding board of what specifically makes Columbus so bomb. Here are some of the things we tossed around:

But we also discussed the difficult stuff. The stuff that we thought Columbus could be better at. I’ll be honest—this conversation went somewhere I did not expect it to go to—but I have since found out that many Big Table conversations landed at this same destination.

Here’s where Columbus kind of sucks when it comes to public transportation.

Other topics we briefly touched on:

All in all—it kicked ass. If for nothing else, it kicked ass to connect with likeminded souls in this community (that I love) that want to see it continue to be the most ballin’ city in the Midwest.

One reply to “The Big Table”